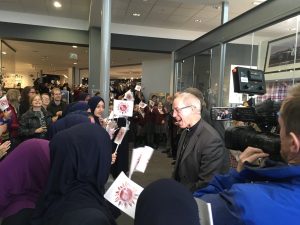 Pupils at Eden Girls, Coventry had the opportunity to meet Archbishop Justin Welby earlier this month as part of the centenary of the Diocese of Coventry celebrations.

Requested by friend, supporter and advocate of the school, Bishop Christopher, we accepted the kind invitation for our pupils to be part of the official welcoming party for the Coventry visit.

Archbishop Welby himself commented on the amazing unity and brotherhood that exists amongst the diverse community of Coventry as he met with civic and religious leaders as part of the celebrations.

Pupils relished the opportunity to spend time mixing with various community groups. Pupils from the Student Council joined others from All Saints C of E Primary School and Blue Coat C of E Primary School to welcome the Archbishop as he arrived at Coventry Transport Museum, where he began his tour of the city.

“It was fantastic for our pupils to be invited to welcome such an esteemed guest to Coventry. The girls spoke of the great pride they felt in welcoming the Archbishop, and what a pleasure it had been to speak to him.”

“Meeting the Archbishop was an amazing experience and something I will remember for a long time.”

A new national helpline for parents and carers will provide personalised support and advice on home learning to support pupils until schools re-open.